We are currently monitoring the South China Sea dispute.

The US has sent the Theodore Roosevelt Carrier Strike Group to the South China Sea for a second time this year. 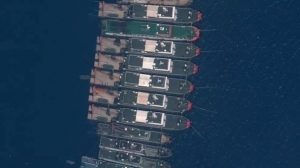 220 Chinese fishing ships are still anchored in the Whitsun Reef, within the claimed exclusive economic zone of the Philippines.