EACS Situation Room is a special mechanism of the Euro-Atlantic Council of Slovenia that can be activated in the time of a larger social crisis with actual or potential security implications (e.g. a larger terrorist attack, natural disaster, armed conflict, etc.).

The Situation room is composed of a group of EASS members who monitor development of a crisis by following local media and writing short reports.

The purpose of the Situation room is:

MIGRATION FLOWS IN THE BALKANS: Review of media coverage, April-May 2020 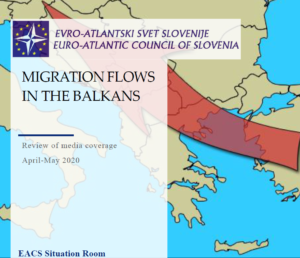 “Whilst the world was dealing with the consequences of the various efforts to stem the spread of the new coronavirus in the Spring of 2020 there was a distinct lack of emphasis on another issue which was simmering below the surface in the Balkans and which could have a significant impact on the situation in Europe more broadly. That issue was, of course, illegal migration flows from the Middle East, via Turkey, and through the “Balkan route” onwards into the rest of Europe. This report seeks to address this lack of coverage of this important issue through the analysis of media reporting from within the states which lie on the path of the route, from Greece, through North Macedonia, Serbia, Bosnia and Herzegovina, to Croatia.  Each of these states has been affected my illegal migration while having to simultaneously deal with a global epidemic. The emphasis was on seeking out local media reports to give a picture of the situation on the ground though the months of April and May 2020. From this data, a brief analysis can then be made as to what the current situation is and how is it likely to develop. The goal of this report is to clarify the illegal migration situation along the “Balkan route” with a view of helping decisionmakers and the general public to have a better overview as to what can be expected in the following months as the medical situation eases and migration flows start moving again.”