ONLINE ROUND TABLE: Security Challenges Of The Corona Virus Crisis And The Role Of Armed Forces 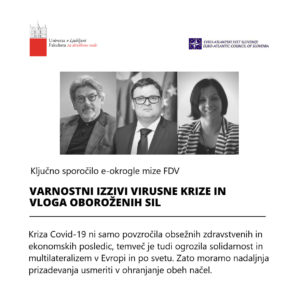 On Wednesday, 27th of May, 2020 an online round table on Security challenges of the Corona virus crisis and the role of armed forces took place.

During the online table, which was organized by the Euro-Atlantic Council of Slovenia and the Chair of Defence Studies at Faculty of Social Sciences, University of Ljubljana, several challenges posed by the Corona crisis on the modern society, politics, international organizations and national security systems, were highlighted by the participating experts.

The round table opened with introductory speeches by prof. dr. Iztok Prezelj, President of the Euro-Atlantic Council of Slovenia, who also served as the coordinator of the round table, and by doc. dr. Maja Garb, Head of the Chair of Defence Studies.

The panel consisted of mag. Mirko Cigler, a publicist, former diplomat and officer of the armed forces, dr. Erik Kopač, Permanent Representative of the Republic of Slovenia at NATO, and doc. dr. Jelena Juvan from the Chair of Defence Studies, Faculty of Social Sciences.

They talked about the global dimension of the crisis and its impact on organization and functioning of the international community, the stages of the pandemic, its impact on various aspects of security and on relations between countries when egoism replaces solidarity. The discussion also included NATO and its response to the pandemic (which is not its core mission) and various forms of support to Member States and Partner countries. Speakers also focused on the various practices of countries on how to involve the armed forces in responding to the Covid-19 crisis. The audience asked the panellists several questions, such as the role of China in the security aspects of tackling the Covid-19 crisis, on the possibilities for establishing better multilateral cooperation in the world and on the involvement of the Slovenian Armed Forces in the crisis in Slovenia.

The round table was concluded with two key findings, firstly that the Covid-19 crisis has shown that the fundamental glue of societies, namely solidarity, is being broken in the world, and secondly that multilateral structures are also being broken and will have to be redefined in order to preserve them. Maintaining solidarity and multilateralism must be the key focus of all future actions aiming to resolve the current situation.

The round table was organized as part of the Faculty of Social sciences’ campaign during the coronavirus crisis.