We are currently monitoring the Coup d’etat in Myanmar. 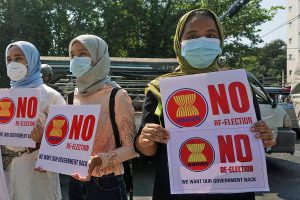 Indonesia has taken a leading role within ASEAN in an attempt to resolve the crisis.

Despite court ruling, Malaysia has continued deporting people back into Myanmar.

Since 1 February over 640 people are said to have been arrested.

EU Foreign Ministers are set to debate imposing sanctions on the military regime.